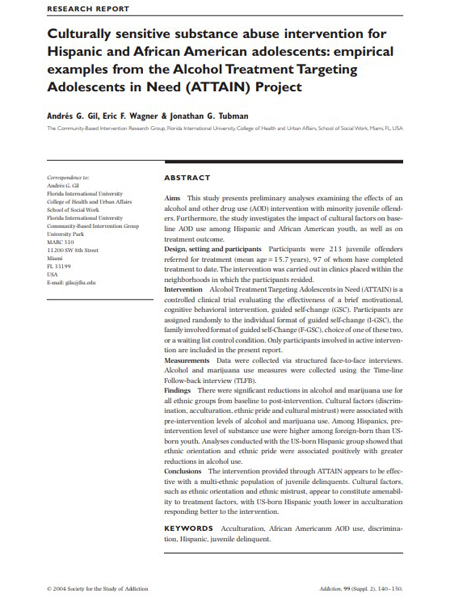 Abstract: This study presents preliminary analyses examining the effects of an alcohol and other drug use (AOD) intervention with minority juvenile offenders. Furthermore, the study investigates the impact of cultural factors on baseline AOD use among Hispanic and African American youth, as well as on treatment outcome. Participants were 213 juvenile offenders referred for treatment (mean age = 15.7 years), 97 of whom have completed treatment to date. The intervention was carried out in clinics placed within the neighborhoods in which the participants resided. Intervention Alcohol Treatment Targeting Adolescents in Need (ATTAIN) is a controlled clinical trial evaluating the effectiveness of a brief motivational, cognitive behavioral intervention, guided self-change (GSC). Participants are assigned randomly to the individual format of guided self-change (I-GSC), the family involved format of guided self-Change (F-GSC), choice of one of these two, or a waiting list control condition. Only participants involved in active intervention are included in the present report. Data were collected via structured face-to-face interviews. Alcohol and marijuana use measures were collected using the Time-line Follow-back interview (TLFB). There were significant reductions in alcohol and marijuana use for all ethnic groups from baseline to post-intervention. Cultural factors (discrimination, acculturation, ethnic pride and cultural mistrust) were associated with pre-intervention levels of alcohol and marijuana use. Among Hispanics, pre-intervention level of substance use were higher among foreign-born than US-born youth. Analyses conducted with the US-born Hispanic group showed that ethnic orientation and ethnic pride were associated positively with greater reductions in alcohol use. The intervention provided through ATTAIN appears to be effective with a multi-ethnic population of juvenile delinquents. Cultural factors, such as ethnic orientation and ethnic mistrust, appear to constitute amenability to treatment factors, with US-born Hispanic youth lower in acculturation responding better to the intervention.