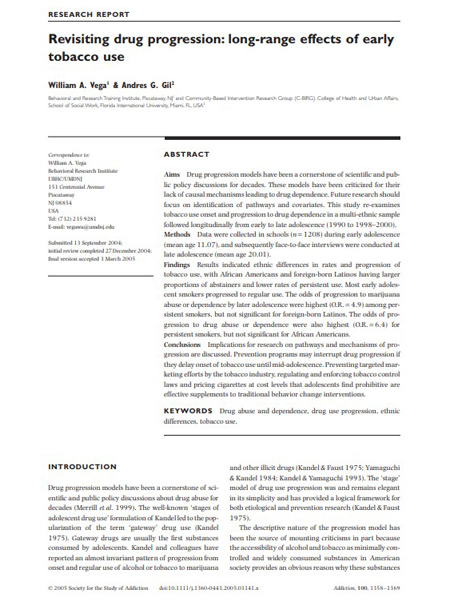 Abstract: Drug progression models have been a cornerstone of scientific and public policy discussions for decades. These models have been criticized for their lack of causal mechanisms leading to drug dependence. Future research should focus on identification of pathways and covariates. This study re-examines tobacco use onset and progression to drug dependence in a multi-ethnic sample followed longitudinally from early to late adolescence (1990 to 1998-2000). Data were collected in schools (n = 1208) during early adolescence (mean age 11.07), and subsequently face-to-face interviews were conducted at late adolescence (mean age 20.01). Results indicated ethnic differences in rates and progression of tobacco use, with African Americans and foreign-born Latinos having larger proportions of abstainers and lower rates of persistent use. Most early adolescent smokers progressed to regular use. The odds of progression to marijuana abuse or dependence by later adolescence were highest (O.R. = 4.9) among persistent smokers, but not significant for foreign-born Latinos. The odds of progression to drug abuse or dependence were also highest (O.R. = 6.4) for persistent smokers, but not significant for African Americans. Implications for research on pathways and mechanisms of progression are discussed. Prevention programs may interrupt drug progression if they delay onset of tobacco use until mid-adolescence. Preventing targeted marketing efforts by the tobacco industry, regulating and enforcing tobacco control laws and pricing cigarettes at cost levels that adolescents find prohibitive are effective supplements to traditional behavior change interventions.