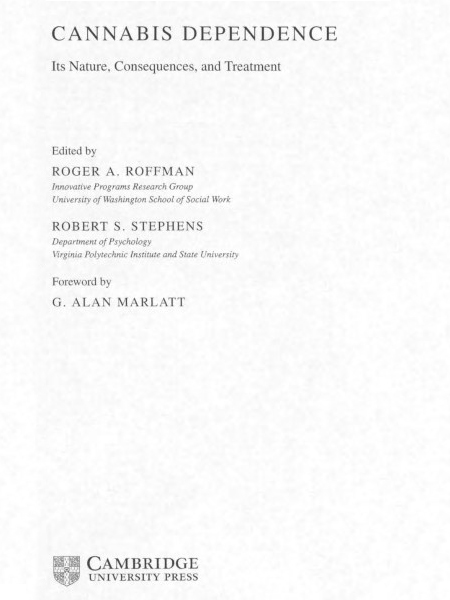 Abstract: Studies of treated cannabis abusers (Ellingstad et al ., 2002; Sobell et al ., 1990; Stephens et al ., 2000) and those who have recovered without treatment (L.C. Sobell et al ., 2000) are few in number compared with studies of other drug abusers. Since national surveys have repeatedly shown that cannabis is the most widely used illicit drug (Substance Abuse and Mental Health Services Administration, 1997, 1998, 2000a, b) this finding is somewhat counterintuitive. In fact, a recent review of drug treatment studies found that only 8% (2 of 28) that met review criteria included primary cannabis abusers in their treatment samples (Ellingstad et al ., 2002). Further, a review of natural recovery studies found that only 1 of 40 reported data from cannabis abusers (L.C. Sobell et al ., 2000). Given cannabis popularity, an interesting question is why only about half a million of the 6.8 million frequent cannabis users (defined as using cannabis ≥ 50 times) enter treatment (Substance Abuse and Mental Health Services Administration, 2000a). One possible reason is that compared with other illicit drugs, the negative consequences of cannabis use are fewer, and if they occur, are much less severe. For example, most of those who initiate abstinence from cannabis do not report severe withdrawal symptoms (Budney et al ., 2001; Wiesbeck et al ., 1996; Zimmer & Morgan, 1995) and the most frequently reported problems appear more related to personal dissatisfaction with drug use rather than objective negative consequences (Stephens et al ., 1994, 2000).