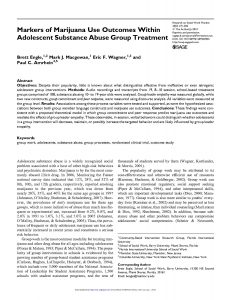 Abstract/Objectives: Despite their popularity, little is known about what distinguishes effective from ineffective or even iatrogenic adolescent group interventions.

Results: Associations among these process variables were tested and supported, as were the hypothesized associations between both group member language constructs and marijuana use outcomes.

Conclusions: These findings were consistent with a proposed theoretical model in which group commitment and peer response predict marijuana use outcomes and mediate the effects of group leader empathy. These observable, in-session, verbal behaviors could distinguish whether adolescents in a group intervention will decrease, maintain, or possibly increase the targeted behavior and are likely influenced by group leader empathy.