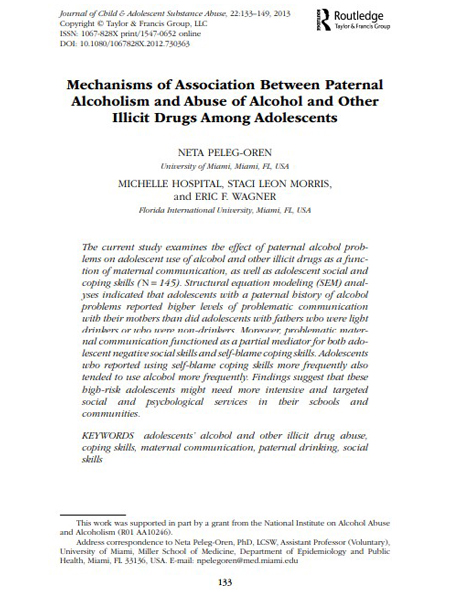 Abstract: The current study examines the effect of paternal alcohol problems on adolescent use of alcohol and other illicit drugs as a function of maternal communication, as well as adolescent social and coping skills (N = 145). Structural equation modeling (SEM) analyses indicated that adolescents with a paternal history of alcohol problems reported higher levels of problematic communication with their mothers than did adolescents with fathers who were light drinkers or who were non-drinkers. Moreover, problematic maternal communication functioned as a partial mediator for both adolescent negative social skills and self-blame coping skills. Adolescents who reported using self-blame coping skills more frequently also tended to use alcohol more frequently. Findings suggest that these high-risk adolescents might need more intensive and targeted social and psychological services in their schools and communities.