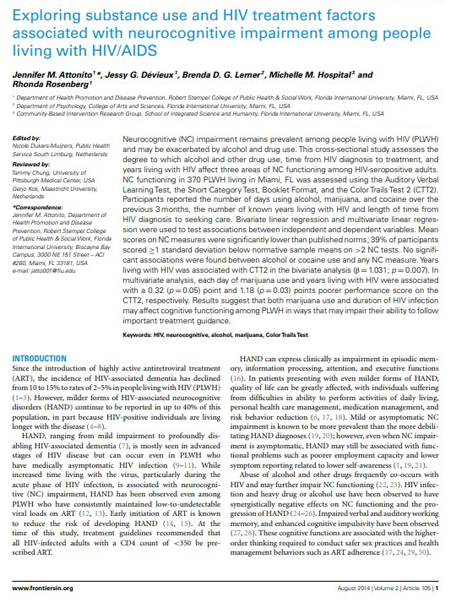 Abstract: Neurocognitive (NC) impairment remains prevalent among people living with HIV (PLWH) and may be exacerbated by alcohol and drug use. This cross-sectional study assesses the degree to which alcohol and other drug use, time from HIV diagnosis to treatment, and years living with HIV affect three areas of NC functioning among HIV-seropositive adults. NC functioning in 370 PLWH living in Miami, FL was assessed using the Auditory Verbal Learning Test, the Short Category Test, Booklet Format, and the Color Trails Test 2 (CTT2). Participants reported the number of days using alcohol, marijuana, and cocaine over the previous 3 months, the number of known years living with HIV and length of time from HIV diagnosis to seeking care. Bivariate linear regression and multivariate linear regression were used to test associations between independent and dependent variables. Mean scores on NC measures were significantly lower than published norms; 39% of participants scored ≥1 standard deviation below normative sample means on >2 NC tests. No significant associations were found between alcohol or cocaine use and any NC measure. Years living with HIV was associated with CTT2 in the bivariate analysis (β = 1.031; p = 0.007). In multivariate analysis, each day of marijuana use and years living with HIV were associated with a 0.32 (p = 0.05) point and 1.18 (p = 0.03) points poorer performance score on the CTT2, respectively. Results suggest that both marijuana use and duration of HIV infection may affect cognitive functioning among PLWH in ways that may impair their ability to follow important treatment guidance.