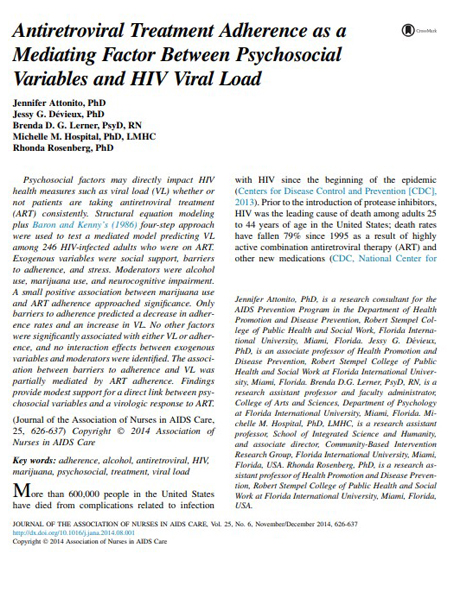 Abstract: Psychosocial factors may directly impact HIV health measures such as viral load (VL) whether or not patients are taking antiretroviral treatment (ART) consistently. Structural equation modeling plus Baron and Kenny’s (1986) four-step approach were used to test a mediated model predicting VL among 246 HIV-infected adults who were on ART. Exogenous variables were social support, barriers to adherence, and stress. Moderators were alcohol use, marijuana use, and neurocognitive impairment. A small positive association between marijuana use and ART adherence approached significance. Only barriers to adherence predicted a decrease in adherence rates and an increase in VL. No other factors were significantly associated with either VL or adherence, and no interaction effects between exogenous variables and moderators were identified. The association between barriers to adherence and VL was partially mediated by ART adherence. Findings provide modest support for a direct link between psychosocial variables and a virologic response to ART.